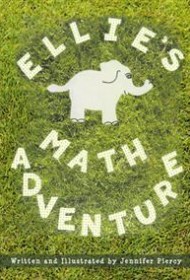 Ellie the elephant longs for the bright pink bicycle she sees in the store window. Although her friend Bernard the bear received a fancy new bike for his birthday, Ellie’s birthday is six long months away. Her mother says she can either be patient and wait for what she wants or speed up the process by earning the $50 needed to buy the bike. In this math book for young children, Ellie practices her addition and subtraction as she decides to follow the latter path.

If Ellie does some household chores for her parents, such as folding clothes and dusting, she can earn most of the money in a week. She earns an additional $10 toward her purchase by cleaning the pool for her neighbors, Mr. and Mrs. Beaver. When Ellie adds $10 to the $45 she has earned from her parents, she sees that she has made $55, enough to buy the bike with $5 left over to treat her family to ice cream.

Throughout her math adventure, the young elephant learns valuable life lessons about taking responsibility, working for what she wants, providing good service for others and keeping track of her income. Illustrations of her notepad containing the daily totals show her progress throughout the week.

Author Jennifer Piercy wrote this enjoyable picture book as an assignment for her college math class. Young children should appreciate the pleasant story and hard-working elephant, though large blocks of text and long, rambling sentences in the book’s second half might intimidate early readers.

Unfortunately, Piercy’s brightly colored illustrations lack artistic perspective; the elephants, beavers, and a school bus appear to hover in the air instead of being anchored to the background. Sharp-eyed readers will notice that the coveted pink bicycle inexplicably becomes lavender on the last page. And an editor’s help to fix misspellings, punctuation and grammatical errors would increase readers’ enjoyment and the book’s overall appeal.