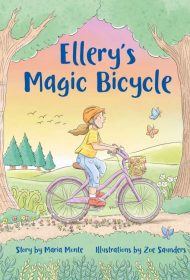 A girl discovers a bicycle that becomes a lifelong friend in the picture book Ellery’s Magic Bicycle.

Ellery spots a dented old purple bicycle, but when she comes near it, it transforms into a shiny bike that looks brand new. Although it doesn’t speak, the bike has its own personality, and Ellery invites it home with her. The bicycle helps her learn to ride, and they spend many fun days together.

As Ellery grows, the bike magically grows, too. Soon, Ellery and the bike meet a new neighbor, Charlie, and after a rough start, the three become inseparable. Years later, Charlie’s family moves away, and Ellery is alone with the bicycle, riding it less and less as she ages.

We watch from the bicycle’s perspective as Ellery and Charlie have a baby, who grows up with a different bicycle. On the verge of throwing away the purple bicycle, Ellery changes her mind, and the book’s final image is a beautiful, two-page spread of Charlie helping their daughter ride her bike, with Ellery and the purple bicycle happily leading the way.

The story offers many wonderful moments, such as the realistic, rough beginning of Ellery and Charlie’s friendship, as he throws pebbles at her; the author skillfully describes the stones “clink, clink, clinking” against the bicycle. Similarly, the bicycle’s bleak existence, unused in the shed, is elegantly described via the “tiny spiders” that “surfed their stringy webs on the bicycle’s spokes.”

The book’s artwork is excellent, infusing the bicycle with vitality and creating a full-blown character out of an inanimate object.

On the other hand, given the depth of Ellery’s relationship with the bike, it’s jarring she would consider disposing of it. It’s also jolting when Ellery and Charlie have a baby, as the story offers no transition between Charlie’s move and their apparent marriage.

Nonetheless, Ellery’s Magic Bicycle is a sweet tale about honoring the best of your past that young readers should enjoy.