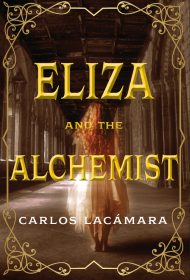 Playwright and actor Carlos Lacámara’s novel, Eliza and the Alchemist, is a mystical, madcap trek through worlds presumably real and realistically etheric, where a young woman becomes the bearer of supernatural powers.

In this far-reaching, light-hearted fantasy, Eliza is an intelligent UCLA student who has been unsuccessful in love or even friendship with men. She ventures into a class in ancient history and folklore taught, once a year, by aging professor Oliver Crowley, who speaks in Latin and advances radical theories that intrigue her.

As Eliza finds herself magnetically drawn to him, she tries to get his attention, finally succeeding by showing him a book written by one of her ancestors that she has surreptitiously taken from her filmmaker father’s library. Crowley is more than impressed. In fact, he disappears with the book.

Trying to track him down, Eliza finds herself in a realm where weird creatures murmur in archaic tongues and the dead may be brought to life. Crowley reveals that the ancestral volume has magical potential and that he and Eliza must now join forces to save the world from evil and destruction.

The story offers a host of deftly drawn, disparate characters, including street criminals, sexual seducers, and mighty moguls in need of being taken down a peg. The seamless narrative is infused with a sly sense of humor. For example, on a third date with a handsome college student, Eliza assesses his worthiness as he ruminates on important world affairs, such as the plight of the Innuit. “He likes Eskimos,” she thinks. “That’s nice. I mean somebody has to…”

Additionally, there’s enough creepiness — blood, vomit, slimy worms and homunculi — to please the most ardent fans of the darker side, and the setting, in and near Hollywood, offers a plethora of opportunities for calamities, changes, and a tinge of romance.

The result is an engaging saga worthy of cinematic treatment. A mysterious ending suggests a sequel, which Lacámara’s audience will anxiously anticipate.