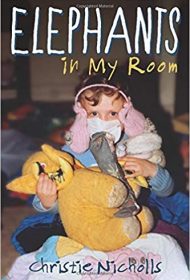 Life’s lessons come through loud and clear in this delightful collection of 17 expressive, pointed, and humorous essays of the author’s life experiences.

Christie Nicholls holds a Ph.D. and works as a stand-up comedian and television-commercial actress. She describes Elephants in My Room as “a nice little collection of honest, if not humiliating, true stories (a.k.a ‘elephants’) from my past.” The book is arranged topically into four parts: Nicholls’ travels, her jobs, people who have died, and the males in her life.

The author’s essays are amusing and often off-color. For example, when describing her mother’s bowling pose, she writes: “…Mom would lift a leg, like a graceful dog urinating.” Indeed, it’s such metaphors—suggestive or not—that make this collection memorable.

The music accompanying a ballet performance she attended was becoming “threatening and hypnotic, like a mob gathering to do something really big.” Piano books “were more like cookbooks—where…I’d make something that would one day be digestible to the human ear.”

Detailing her awkward time as a telemarketer (a short-lived job), she reports: “. . . I had stumbled onto something profoundly prostitutional [sic]; I could talk to lonely old men and women like a platonic sex phone operator. When they reached climax in our conversation, I would simply run their credit card and take my cut.”

As each essay unwinds, Nicholls’ reveals lessons learned. Discussing her grandfather, who was confined to a wheelchair, she sees a teaching moment in his ability to remain happy, despite all: “I knew that smile. It was fulfillment. The kind of pure, unadulterated fulfillment that comes from keeping your head up, no matter the circumstances.”

Some readers will likely be offended by the “f-bombs” generously sprinkled throughout, as well as the author’s explicit depictions of sexual acts and bodily functions. Most, however, will laugh along with the honesty Nicholls displays as she shares her life, if for the wonderful imagery alone—fresh and compelling.