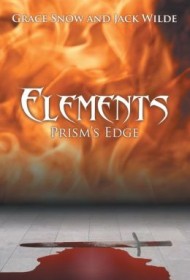 This creative young adult fantasy novel set in 2021 follows the adventures of Lily, a teenaged human girl who transforms into the supernatural Light Element of Earth. Highly detailed and skillfully plotted, Elements: Prism’s Edge is intended as the first in a series of books based on the role-playing game, Elements, created by co-author Jack Wilde.

Following the shocking murder of the previous Light Element, Lily assumes her new role after assignment by the Elders. Naive and kind-hearted, she seems unsuited for the often-violent job of channeling powerful light through her body as she joins forces with other Elements (such as Fire, Wind, and Shadow) to preserve peace in the world. Although as an Element, Lily will not age or get sick, she can be murdered, and mysterious Dark Elements undermine Lily and her co-horts’ efforts by waging deadly attacks against them. The book provides an exciting look into her transformation and evolution as an Element.

Excessive use of adjectives slows the pace and increased the length of the story, but these descriptions may help bridge the gap for younger (video and role-playing) gamers more accustomed to sensory overload than using their imaginations while reading. The first sentence on page one is typical: “The first rays of light spilled through the glass doors, splashed across the pristine fluffy white carpet, and reached across the white comforter that covered the small wood-frame bed, barely missing the pastel face of a small fifteen-year-old girl who slept there.”

Another minor flaw is anachronistic slang, already trite today, which should be hopelessly outdated by 2021. Phrases such as “So let’s pull the lead out,” “Glad you all accepted my invite,” and “Cut the act” are among many uninspired retorts used by these futuristic characters.

Despite these weaknesses, the book holds much appeal. Young adult fantasy aficionados will enjoy the well-developed characters and the game-like quality of the Elements: Prism’s Edge.