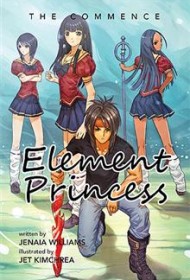 This seemingly manga-inspired young adult fantasy revolves around a group of high school heroines who possess the ability manipulate the elements.

The storyline—set largely in and around a small town near Tokyo—begins with Kenta Shiroyama, a “warrior of Heaven,” attempting to locate and train seven Element Princesses (each has the power over one element, such as fire, water, earth, wind, etc.) to combat an evil underworld organization known as the Demon Docks. But as he races to identify the princesses, so too does Demon Lord Derek Southbound and his minions, who are bent are destroying them before they can unite.

Initially, potential readers will notice the eye-catching cover art. Assuming that the novel will contain more striking illustrations inside (the front cover credits an illustrator), those who then pick up this novel will feel let down upon finding that it is not illustrated.

More disappointing, however, is the literary content, which is difficult to parse at times. The grammatically challenged writing style makes for a decidedly awkward reading experience: “Her knees, hidden behind long boots that reached just above those said knees, graced upon his back.” Inconsistent verb tenses (“This was his house. For him to knock at all is a crime”) and improperly used words (“Kenta’s swerved sword…”) hamper comprehension at every turn.

The disappointment is made even more acute because of this storyline’s commercial potential. A cast of courageous female superheroes battling to save the world from evil could find a fervent young adult audience but, sadly, the novel’s execution will deter all but the most persistent readers.