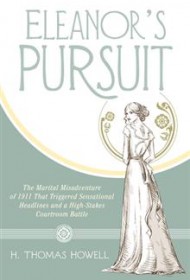 In Eleanor’s Pursuit, H. Thomas Howell traces the true events behind the 1911 tabloid sensation involving Broadway actress Eleanor Pendleton and her brief marriage to Louis Ream, presumed heir to one of the country’s wealthiest families.

Pendleton realizes her dream of marrying well when Ream, son of steel magnate Norman Ream, proposes in a whirlwind romance. The 24-year old pair wed in an impromptu ceremony without notifying his parents. After five days, Ream travels to his family’s Connecticut country home to seek his parents’ approval as Pendleton awaits their reunion in Manhattan, only to reluctantly apprehend that he has acceded to familial pressure and will not return.

Pressured by the Ream family to annul the marriage, Pendleton acquiesces and resumes her stage career while pursuing other romances. However, when Ream appears set to inherit millions upon his father’s death in 1915, Pendleton challenges the annulment. The ensuing litigation titillates the press and a public fascinated with scandal, glamour, and wealth.

Howell deserves kudos for his meticulous chronicling of this true story that showcases his varied background as an accomplished trial attorney and genealogist. He aptly introduces the characters, describes the cultural milieu of the times, and explains the legal proceedings. He takes no pains to hide that his sympathies lie with Eleanor who, though not above critique, “married a first-class nincompoop.” This droll humor energizes the narrative and overcomes patches of non-essential genealogical minutiae and other detail, such as several pages devoted to the travels of Louis and his third wife. These faults are forgiven in light of Howell’s infectious enthusiasm for the topic and effective blend of reportage and commentary.

This is an enjoyable story of a woman scorned, appealing for its glimpses into early 20th century American society. The text Includes 39 illustrations, chapter endnotes, and index.