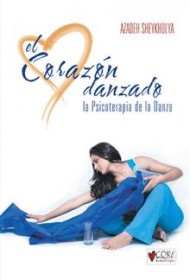 Author Azadeh Sheykholya, an Iranian-Mexican former dancer who devotes her time to teaching and studying dance therapy, weaves together dance theory and personal experience in order to introduce her method, Core DanceTherapy.

As a disillusioned medical student, Sheykholya found a book by María Fux, a well-known proponent of dance therapy, and discovered a new direction for her life. She discusses her experiences as a student and teacher of the subject, tracing a line from her early influences to later ruptures with these influences—an encounter with Fux herself doesn’t go quite as planned — and the development of her own method.

Sheykholya’s Core Dance Therapy, rooted in the concepts of catharsis and freedom of expression, is not fully explained until the last chapter (which also includes 50 exercises). Until then, her narrative covers a recent history of dance, as well as psychological and philosophical viewpoints on the subject of both dance itself and dance as therapy.

At times, Sheykholya’s narration becomes a little too personal: After describing a rift with a former collaborator, for example, she inserts a note asking: “Merce, if you’re reading this, can you please return the book I lent you years ago?” In addition to deleting such details and placing the chapter about her method earlier in the book, the text would benefit from a thorough edit to parse the level of detail devoted to her therapy’s influences and sources, as well as to trim repetitions and the author’s use of excessive examples to illustrate a point, and to correct the writing of HEadInGs LiKe THiS.

Though Sheykholya’s descriptions of techniques will leave you with the urge to get up and try them for yourself, ultimately, this book is more memoir than instruction manual. As such, it holds some interest, but those seeking a practical guide to dance therapy should look elsewhere.