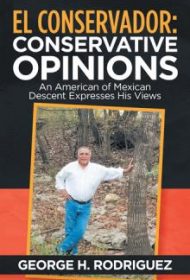 The population group known as Hispanics crosses lines of nationality, race, geography—and politics. Some groups, such as South Florida Cuban-Americans, have leaned Republican, while the mainstream media tends to align most other Hispanics with Democrats. As a staunch conservative Republican, George H. Rodriguez, a Mexican-American from South Texas, defies the latter stereotype. An appointee of Presidents Reagan and Bush, he later became a leader of the Tea Party movement. In this collection of brief editorials penned between 2006 and 2017, Rodriguez presents his views on a range of contemporary issues, focusing on the border, immigration, and the view from South Texas.

Rodriguez’s book is divided into four parts. It focuses first on issues related to the border, immigration, and U.S.-Mexico relations; second, on issues of race in politics; third, on his Tea Party experience; and last, on the media and its alleged left-wing bias.

Each chapter is generally two or three pages. The author’s tone is largely measured and respectful, eschewing Washington Beltway or media jargon and favoring down-to-earth language.

Some of Rodriguez’s perspectives are intriguing. For example, he sees hypocrisy in Mexican cries of U.S. racism, since he alleges that Mexico has its share of racism and colorism. He draws on a lifelong knowledge of the language and culture, not shared by any non-Hispanic critic who would dare raise the issue.

However, most of this book repeats national GOP talking points, while giving them a local flavor. Frequently, Rodriguez attacks his opponents with strawman arguments. For instance, he accuses his political opponents, in several places, of favoring “open borders.” Most mainstream Democrats unequivocally deny endorsing this viewpoint. He also uses the term “globalists,” an ill-defined category, to serve as a catch-all for all he dislikes about an opponent’s foreign policy.

Rodriguez’s editorials lack important new arguments or groundbreaking new research, but his collection is a clear, concise, and judicious statement of Tea Party conservatism that’s most likely to appeal to the already-converted.