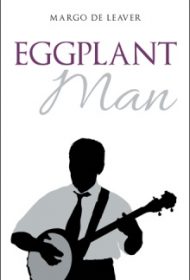 Eggplant Man is a touching love story about two homeless people who meet in Harlem in the summer of 2005.

Ruby has been homeless for 20 years, surviving on what she finds in other people’s trash. She has a vivid scar on her face and a troubled past. When she encounters LeRoy, a nomadic musician, she calls him Eggplant Man because his skin is as dark and smooth as an eggplant she finds in the trash. The meeting is tumultuous for both of them and a spark of attraction jolts them out of their isolated, difficult, lonely lives. But even as their love flourishes, a tragedy and scars from the past threaten their future together.

This is a short novel, surprising in its intensity. The awakening of love and sexual arousal between the two main characters is explicitly, but also sensitively, explored. Both characters suffered in their early lives in Louisiana, Ruby particularly so. Once the details of her tragic background are explained, the love story moves forward at an enjoyable pace.

The language used in Eggplant Man at times feels out of step with its characters and subject matter. Ruby’s scar, for example, is a “keloid,” LeRoy’s fingers are described as “marfanoid” at one point and “phalanges” at another, medical terminology that’s possibly the result of the author being a doctor. That language and details about Ruby’s past life slow the book’s early part, and the ending seems a bit rushed, but the gentle beauty of De Leaver’s characters shines through. It is impossible not to root for a happy ending for Ruby and LeRoy.

Eggplant Man is an unusual read. Music plays an important part in LeRoy’s thought processes, and lyrics are interspersed throughout the text, carefully chosen and always appropriate to the action at hand. Although Ruby’s and LeRoy’s lives are hand-to-mouth and based on a history of violence and suffering, the story that emerges is eminently hopeful, optimistic and satisfying.