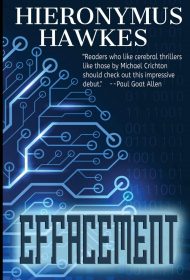 In the near-future, people have largely traded the real world for a virtual reality made possible by implanted biometric chips that record an individual’s entire existence on a “lifelog” and are the only way to perform many functions, such as getting a bank account or hailing a cab.

Protagonist Cole Westbay, one of the inventors of this technology, is trapped in a web of intrigue when he wakes to find his short-term memory erased and his chip removed, cutting him off from the augmented world. As he attempts to discover why he was assaulted, Cole grows disillusioned with his creation. The world has become filled with dilapidated infrastructure because people no longer maintain the non-virtual world, and those non-augmented for privacy or financial reasons can’t perform many basic functions.

It becomes clear that Cole’s technology has been co-opted by a clandestine government agency for surveillance and other nefarious purposes. To clear his name of the ironic charge of unplugging from his lifelog, known as “effacement,” Cole teams with an underground organization dedicated to fighting the augmented lifestyle.

Hawkes’ plotting is taut and effective, and the world he creates is credible. The reader will easily imagine a future where the shadowy Federal Department of Fidelity epitomizes the surveillance state.

Cole is richly depicted as a clueless technologist who slowly realizes the horror that he has created. Other main characters exhibit the same depth, especially Cole’s fiancée, a vibrant but narcissistic personality who plays a critical role in the plot.

The ending, however, is rushed and implausible. Some characters, such as Cole’s mentor, undergo rapid personality shifts, and the shocking conclusion is packed into a few pages.

A revised ending and more explanation to some of the characters’ decisions would widen the book’s appeal. Still, science fiction and thriller fans will enjoy this compelling story.