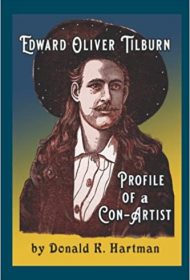 Donald K. Hartman’s Edward Oliver Tilburn: Profile of a Con-Artist follows the life of a man who continually created himself anew.

Beginning with Tilburn’s birth in Philadelphia in 1859, and detailing his subsequent studies, first in Pepperell Academy and then Yale, Hartman tells how Tilburn left his schooling to become an actor and musician. Soon, he was working for traveling medicine shows promoting such nostrums as liver pads and “life-sustaining” elixirs.

In 1891, Edward Oliver Tilburn purportedly found God and began preaching in Texas. During the 17 years Tilburn served as a minister, he frequently relocated. “Con artists are notorious for their ‘disappearing acts,’” the author comments dryly, after describing Tilburn’s elopement with a “choir singer” and his fight against charges of embezzlement from one of his congregations.

Using false claims of experience and professional qualifications (i.e. doctor and judge) Tilburn subsequently served on chambers of commerce, promoted therapeutic devices, founded a short-lived college, and sold units of land to “oil speculators.” In between various projects, he wrote books and gave lectures on subjects ranging from “The Hidden Mystery of Sleep and Dreams” to “The Law of Universal Prosperity.”

Hartman emphasizes Tilburn’s talents and wonders why “a man with so much intelligence and ability, felt the need to embezzle or turn to selling snake oil medicines….” The author, however, is unable to locate resources (like diaries or letters) that could potentially answer this question. So although Hartman’s research, using sources like newspaper articles and genealogical records, is meticulous, the book only skims the surface of Tilburn’s life. The emotions and motivations that could make the subject fascinating and alive aren’t yet there.

The author could have given Tilburn’s profile more texture by spending more time developing the historical context in which Tilburn lived. Overall, however, the book is a straight-forward, informative read about a man whose life was “full of deception and empty promises.” It should interest those captivated by tales of scoundrels.