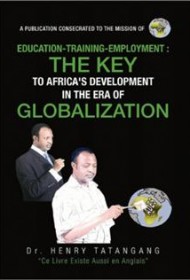 This book explores what the author and his organization, the African Development Epistemological Society, view as the primary problem impeding African economic development: the African education system’s poor record of turning out citizens trained in an employable field.

Dr. Henry Tatangang surveys the history of education in both the West and in Africa—using his native Cameroon as a case study—and concludes that the Western model, presently used in Africa and which he terms “selectiveness education,” focuses on directing students towards higher education (termed here as “tertiary education”), especially those who are wealthy and privileged. As a result, the system ignores students who might be better suited for vocational training, thus contributing to the high dropout rate from African secondary schools.

The reform suggested by Tatangang—termed “talent-development education”—would be a two-phased program. The first phase calls for the teaching of Christian morality; the second, mirroring Western occupational education, would concentrate on the teaching of a skill. This, according to Tatangang, would go a long way toward alleviating the crisis of African poverty.

Nothing comes easy to the reader in this book. The text would have been well served with a judicious edit, as it is abounding with repetition and issues of grammar and usage (indeed, the word “Cameroon” is misspelled on the book’s back cover).

But Tatangang is well grounded in the literature of the field and delivers the message of educational reform with the zeal of a missionary. While his solutions, despite his protests to the contrary, are not new (experiential learning has been a part of secondary education in the West for decades), it’s difficult to argue with his basic logic: that the African educational system needs serious rethinking, and that a turn toward occupational education would ultimately help the African economy.

Specialists in the field of education reform will find Tatangang’s thesis an interesting one. General readers, however, should expect a difficult and tedious read.