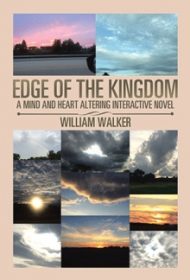 William Walker’s Edge of the Kingdom: A Mind and Heart Altering Interactive Novel is a mash-up of romance, marijuana, and God— and then more marijuana.

Jack is a Marine on leave for one night before his third Middle East deployment when he meets—and connects with—a divinely inspired stripper named Trinity, who invites him to eat pancakes, get high, and meet God.  What evolves is basically a stoner’s love story with sexual descriptions that often border on the pornographic and employ unusual euphemisms, such as “she caresses that snake of blood filled with love”).

In the author’s note, readers are instructed on the best way to experience the book and to make it more like a movie. The instructions include: listen to suggested music, pause at any ellipses (some pages have more than 50), follow the many parenthetical instructions/comments, and smoke marijuana. The author explains how marijuana helped him discover God and that getting high provides a shortcut to enlightenment. In fact, later in the parenthetical comments, the author admits to having written the book’s last third while under the influence.

Reading the instructions and the many points of view (first-person, first-person plural, second-person, third-person) is confusing. Instead of making the novel come alive, it has the opposite effect, taking readers out of the story. The author excuses the book’s bad grammar and punctuation in the introduction, but the novel’s frequent comma splices and other errors add to the confusion.

Sometimes, the novel presents a nice flow of description and dialogue, but many times characters veer off into a stoner’s stream-of-consciousness, with such unintentionally humorous passages as: “This is how she knew that they were soul mates. They could read each other’s mind.”

Readers who embrace a more alternative lifestyle and who believe in God and Oneness but are against organized religion might appreciate the author’s intentions. But the book’s stylistic obstacles make this a challenging read overall.