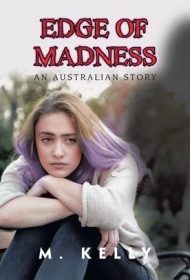 Edge of Madness is a poignant, coming-of-age novella set several decades into the future as a young girl, orphaned at age eight, moves across Australia struggling to handle life’s unexpected situations. Ultimately, she’s forced to deal with her declining mental health.

As the story opens, 26-year-old Marj Anderson reveals she’s at a mental health clinic in Dubbo, South Wales, diagnosed with (BPD) Borderline Personality Disorder. It’s a condition marked by depression and extreme emotional sensitivity that can impact behaviors and cognitive functions. A psychologist has advised Marj to write about her experiences to better understand her condition.

Marj then relates her early years. The world is at war with China and facing the consequences of global warming. Losing both parents lands country girl Marj at the city home of her great aunt and uncle. It’s a place of self-navigating cars, solar-powered homes and modern living. Uncomfortable in her surroundings, Marj becomes pregnant at 15. Resenting her situation and lacking any motherly instincts, she soon spirals downward, and tension builds amidst Marj’s drinking, sexual encounters, short-lived relationships, and kidnapping.

Throughout, Marj’s life entwines with a bevy of characters, from social workers and homeless individuals, to fellow bar hoppers and a biker gang.

Author M. Kelly’s crisp, staccato writing style nicely reflects Marj’s detachment. For example, when Marj feels overwhelmed by her infant’s crying, she writes, “I had enough. I just wanted her to stop. I picked up a pillow and put it over her face.” Such actions help build tension as the storyline moves forward.

On the down side, although Marj’s revelation of her BPD diagnosis quickly draws readers into this central character’s emotional state, it may seem a bit of a spoiler. Additionally, the wrap-up feels somewhat contrived.

Overall, though, Edge of Madness succeeds as a compact, well-paced novella for readers who appreciate a story of an underdog struggling to improve her life.