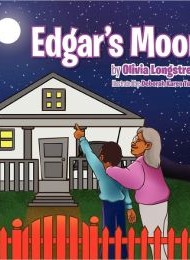 Most children wonder at some point, “Why does the moon seem to follow me?” Olivia Longstreet takes this common question as a jumping-off point and spins a charming tale in her picture book Edgar’s Moon.

Edgar, a boy of nearly eight years, lives in the city and enjoys looking at the moon. He wonders how far away it is, whether there’s a man in the moon, and if the moon is made of cheese. When Edgar visits his grandmother, who lives in a small town, he sees the moon again, and wonders if it has followed him there. Later, Edgar sees the moon from a Greyhound bus as he travels to visit his other grandparents in Ohio, and he sees it again when he arrives there. He asks, “Is this my moon, or is this Ohio’s moon?” His mother answers: “Well, Edgar, this is your moon. If you travelled around the world, you would see the same moon. God made one for the whole world to enjoy.”

Longstreet’s writing and Deborah Karen Tudtud’s illustrations do a fine job capturing the wonderment of childhood. Some of Edgar’s questions aren’t answered in the book, but Longstreet includes a “Did you know?” page at the end that provides some “moon facts,” including the origin of the phrase “The man in the moon.”

Although it seems a strange choice to show the moon only in its “full” phase throughout the book, this is perhaps a necessary consistency for children still learning the concept of a single moon, visible from various locations. The different moon phases is also absent from the “Did you know” page, however, an omission that makes the book feel somewhat incomplete. In addition, the text could use copyediting to correct errors of tense and other minor issues.

But these problems don’t hamper the story. Edgar’s Moon is an enjoyable tale told from a child’s eye-view, one bound to win over a young audience.