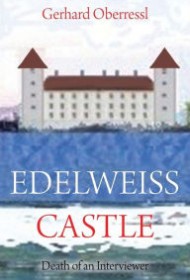 Fans of mystery fiction who cut their teeth on Agatha Christie or even Arthur Conan Doyle may feel at home with the pacing and slow character development of Edelweiss Castle, which is subtitled Death of an Interviewer and teased on the cover as “A Detective Etienne Friendly Mystery.” The novel is thoroughly European in its feel, not just because it’s set in a fictional Austrian province but because it’s about the dynamics of old-world aristocracy, albeit in the modern age.

Joseph von Aybesford is a supporter of sustainable farming and scion of a family that is the benevolent hub of a quiet agricultural province, Goodland. He is about to give a TV interview, but the reporter, with whom he’d made a deal to talk about his eco-concerns, falls ill and is replaced at the last minute. She’s later found dead, and the search to uncover the truth about her murder —  an investigation led by detective Etienne Friendly (under an alias) — consumes the book’s plot. Much of the investigation ends up revealing the tangled web of romances and complex relationships amongst the rich and their servant classes.

The genteel unfolding of the soap-operatic story can be slow reading, especially because Gerhard Oberressl’s English, though proper, is stilted, and he sometimes stumbles with incorrect words (for example: instead of “comprehended,” he writes, “I apprehended little”). There are many extraneous details and subplots that might have been added for misdirection, but generally serve to confuse rather than intrigue readers.

The dizzying number of inter-related characters also adds to the confusion, as does the author’s use of various characters’ points of view and through journal entries. By the somewhat surprising climax, readers might forget which character is talking. Luckily, Oberressl includes a list of names in the introduction.

Etienne Friendly turns out to be an enigmatic but compelling character. One hopes that future novels featuring the detective will be more streamlined in order to more fully engage readers.