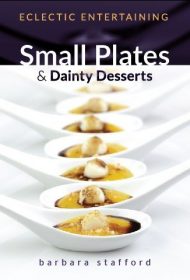 Cooking instructor Barbara Stafford has assembled her favorite collection of small plates and dessert recipes in this glossy, colorful and well-produced cookbook.

The dishes here are indeed eclectic, a mix of trendy recipes such as Grilled Watermelon and Goat Cheese Bites and “classics” such as Festive Fruit Pizza with a cookie crust (with homemade instead of refrigerated cookie dough). Many of the author’s recipes are on point with the latest trends, using items such as flavored balsamic vinegars and coconut oil, a Himalayan Salt Block and small cast iron skillets for cooking. Yet she also includes simple, basic recipes with two or three ingredients, like Chocolate-Dipped Strawberries.

The author’s style is friendly, and her instructions are easy-to-follow, with a few tips sprinkled throughout. For example, on Grilled Coconut Shrimp, she writes: “Having the (shrimp) tails removed makes this so much easier to eat at a cocktail party. I once was faced with a glass of wine in one hand and a plate of shrimp in the other with no surface to set either down. Well, that tail was a challenge…” Each recipe has a nicely photographed finished dish so that cooks can see how it should look in the end and decide if it’s something they want to tackle. She also notes recipes that are vegetarian and/or gluten-free.

Despite largely precision instructions, the cookbook is best suited for readers/cooks with some intuitive knowledge of cooking so they won’t be thrown when a dish takes longer to brown than expected or when they’re told to add ground cinnamon, nutmeg and cloves to taste or to use a “loaf pan,” no size specified.

That said, this is a lovely cookbook that’s an enticing blend of recipes that cooks will be excited to try, from Lemon Lavender Burrata to Stuffed Portobello Mushrooms to Mini Molten Chocolate Cakes. This is the second in the author’s Eclectic Entertaining series and will certainly whet the cook’s appetite for a third.