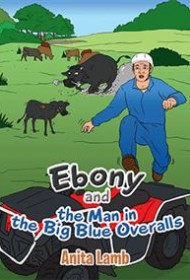 In Ebony and the Man in the Big Blue Overalls, Anita Lamb presents a children’s picture book based on a true story from a New Zealand farm.

The story is told from the perspective of Ebony, a calf born in a creek. Ebony scrambles out of the creek, only to have her mother charge and head-butt her back into the water. A farmer — the “man in the big blue overalls” — steps in and rescues Ebony. He tries several times to reunite Ebony with her mother, to no avail. The man and his wife then care for Ebony, eventually introducing her to a mother who has lost her calf. This mother cow adopts Ebony as her own, and all ends happily.

Lamb’s tale brings home the farm experience, from the strange behavior of Ebony’s mother to the hard work of the man and his wife. Especially fascinating is the process of coaxing the adoptive mother to accept Ebony, which includes draping the skin of the mother’s dead calf on Ebony, in order to provide a familiar scent.

The text includes nice touches, such as the blue font the author uses every time the man in the big blue overalls is mentioned, and the boldfacing of words for emphasis. The first-person storytelling helps readers become invested in Ebony’s fate.

The book also has a few downsides, however: The story may upset some young children, as Ebony’s mother treats her in a way that seems exceedingly cruel (although youngsters will be equally thrilled to see Ebony eventually paired with a suitable adoptive mother). The text contains several copyediting mistakes, and the illustrations, while adequate, are a bit flat. In addition, the book repeats several illustrations exactly, just a few pages apart from their original placements.

Despite these issues, Ebony is a sympathetic and cheerful protagonist, and the book offers a glimpse of an unusual side of life that should be intriguing to most young readers.