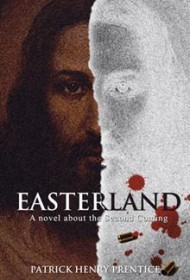 What if Jesus Christ returned to the earth through the magic of science, and he turned out to just be this guy, you know? Emmy-award winning writer Patrick Henry Prentice’s tackles this question in his debut novel about faith and redemption.

The novel begins with some scientific alchemy in the vein of Michael Crichton. Catholic scientist Nicholas “Doc” Bishop is summoned by the Vatican to receive the blood of Jesus of Nazareth, taken from the fabled Shroud of Turin. Bishop uses this DNA to create a clone of the Son of God—in fact two clones, implanted into two different mothers.

Peter Ponto grows into a simple young man with a dark temper. Paul Amarante makes a promising start but gradually becomes withdrawn from the world. By adulthood, Peter is running a motel and manifesting otherworldly powers. Paul drives a cab and is in deep denial when Bishop reveals the truth. “Do I strike you as a guy on a mission from God?” he asks.

This all comes to a head when televangelist Billy Tarr dreams that the savior will return, and plans an enormous revival meeting in the heart of Texas, branded as “Easterland.”

Prentice is a practiced writer, who has written extensively for television, and he takes an interesting approach to what sometimes lends itself to the monotony of books such as the Left Behind series. While there is a healthy smattering of biblical mysticism (swarms of insects and snakes, etc.), these rough-hewn men are played more as feuding brothers out of a Sam Shepard play than as the savior and antichrist.

The prose doesn’t quite rise to the occasion—Prentice shuns the use of speech marks, and has a tendency to tell rather than show. But his alternative take on biblical mythology has a rare depth of feeling that readers may indeed appreciate.

Author Platform: Patrick Henry Prentice is a writer, producer and director of more than 200 films for television. He is the winner of five national Emmy awards and has been nominated for an Oscar.