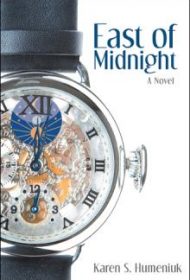 The story tells the on-again, off-again romance between Cameron, a pre-med student suffering from a crisis of lost faith, and the faith-filled Lydia, an engineering student. The two were friendly acquaintances in high school before Cameron’s not-so-nice friend set up a disastrous blind date between them. They subsequently dance around each other, but eventually, their friendship rekindles —until a tragedy changes everything.

Humeniuk’s characters are layered, exhibiting frailties and foibles even as their sense of faith shines through. Minor characters are equally real and believable, and Humeniuk’s lush descriptions immerse readers in the various settings: “A strong gust of wind, scrambling through the tops of the trees overhead, startled her. After tossing the upper branches, it departed, dancing as it crossed the lake, whipping up white caps beyond the point.”

But the story also has some drawbacks. In addition to Cameron and Lydia’s viewpoints, it includes the perspective of Lydia’s aunt Marrah, who is addicted to pain killers and dealing with her own crisis of faith. Her narration—and that of a minor character who narrates only one chapter—unnecessarily complicates the narrative.

Additionally, most of the dialogue involves sermonizing. Many of the characters speak in paragraphs that take up more than half of a page—and their talk is not only about religion or philosophy, but also about more mundane topics, such as meals and beverages.

Additionally, these modern 20-somethings communicate solely through text and email, rather than with Instagram, Facebook and other social media popular with millennials. One minor character even asks Cameron to write when he moves to Wyoming for the summer.

Such issues distract from an otherwise enjoyable story. Nonetheless, readers will appreciate the characters, the author’s abiding sense of faith and purpose and the story’s message that morals and values never go out of style.