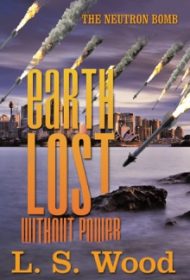 Hundreds of multiple-warhead neutron bombs have been put into space by the Russians as a “defensive” weapon. But it turns out they have faulty control mechanisms, and after one missile arms itself and falls on Russia, the Russians agree to let the U. S. send the Space Shuttle Twitchel to retrieve and remove the missiles. Unfortunately, a shower of meteor fragments from Haley’s Comet disrupts the process and somehow launches the rest of the missiles. A massive explosion of neutron bombs is unleashed, which destroys all electrical power and electronic devices on Earth and in the atmosphere.

The Twitchel astronauts take shelter in the International Space Station, thanks to the Russian cosmonauts there. Above the earth’s ionosphere, they are safe from the deadly cloud of “wild neutrons” spreading over the land. A year passes. Due to what citizens call “The Neutron Creature,” everyone on Earth is sick or mentally deficient.

The astronauts make danger-filled runs to Earth and back. There, they—astronaut Ann Mitchell in particular—adapt to personal loss, family issues and the neutron monster in the atmosphere, and aim to help “peace to prevail around the globe,” and to improve life for all, ”even without electrical power.”

The novel’s thematic potential is burdened by a narrative replete with writing issues. It’s overlong, (the first 45 pages—about the original atom bomb development—add nothing to the storyline), and awkward sentence structure abounds (“The girls were bitterly cold toward me when they first saw me like I was dirt on snow or ice or something bad like that when I returned back home to them from being taken away from them against my will”). Repetition, run-on sentences, and profuse spelling, grammar and punctuation errors add to its problems.

While the story has potential, it requires substantive editing in order to fulfill its author’s intended goal.