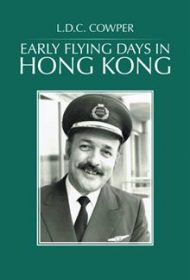 This interesting memoir follows New Zealander Len Cowper’s career as a Hong Kong-based pilot with Cathay Pacific, flying all over Asia and, as the fledgling airline grew and the planes got bigger, to Australia, England, Europe and the US.

From the late 1950s to early ‘80s, Cowper had a grandstand seat from which to observe the dizzying rise of the international carrier. He combined flying with high-level management roles, giving him unique insight into Cathay’s expansion: the planes bought, routes flown, and staff that maintained and crewed the aircraft.

The narrative also charts the parallel development of Hong Kong from a relatively sleepy backwater into today’s pulsating artery of commerce and tourism. And Cowper draws on a vast store of lively anecdotes; for example, flying the Duke of Edinburgh from London to Australia for the Commonwealth Games, delivering 10 tons of gold bullion, and surviving the worst typhoon ever to hit Hong Kong.

Overall, this material will be catnip to aviation enthusiasts, who will especially love authentic descriptions of early commercial flight: 20-hour days flying between Hong Kong, Bangkok, Rangoon and Calcutta. “There was no such thing as flight time limitations in those days,” writes Cowper. “You flew until you were ready to fall over. ”

General readers, however, may face some challenges: technical jargon, the overuse of abbreviations and Cowper’s professional focus on aircraft performance. Additionally, the author’s tone can be offputting. The cover photo of Cowper in uniform shows a handsome, dashing man, so it’s not hard to believe his accounts of sexual exploits with a long list of attractive Asian women. Indeed, he was married four times. However, his inclusion of crude, explicit descriptions of such encounters—he sprinkles the f-word throughout and employs  gratuitous use of the c-word—seems certain to offend some readers.

By detailing his sexual conquests this way, Cowper has unwittingly diminished his offering.  Those who can overlook this issue, however, will find an otherwise rich, rollicking story.