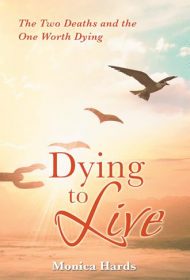 In Dying to Live, Monica Hards offers a slim memoir that includes details of her personality, events in her life, relationships, and spiritual experiences, which include a near-death encounter.

Growing up in Germany, Hards was “an extremely sensitive girl” who found herself deeply drawn to music, so much so that she became a violinist. Her sensitivity, or extrasensory abilities, enabled her to not only sense dead people around her but to “tell by the smell if someone had been in a room, or if the person would be ill the next day.”

Later, after her first daughter’s birth, complications while in the hospital sparked an out-of-body experience and visit to what she feels was heaven. She saw Jesus, who indicated that she had more work to do and should return to her body.

The book is divided into two parts: The first tells the facts of her life; the second expands on these and theorizes about their impact. The length and significance of Part 2’s chapters vary. Some are cursory, such as the three-paragraph chapter about her grandmother waiting for a bus. Others are longer and more meaningful, such as ten pages about the difficulty she had extricating herself from an abusive relationship. Bits of wisdom are sprinkled throughout the narrative, as in: “If you step back, the eye can identify beauty.”

Unfortunately, convoluted sentences pepper the text: “It is one of the most painful experiences of the counter-finality of the unconscious when such a woman has to experience that with all her efforts…she finally gave birth to her child’s life but did not allow it.” This makes for a work-intensive read. Additionally, while the book’s back cover suggests that its main theme is spirituality, the narrative is actually more memoir than metaphysical reflections.

Overall, this is a highly uneven offering, which may deter readers. But those who have suffered from abusive relationships may appreciate the author’s honest recounting of this part of her life.