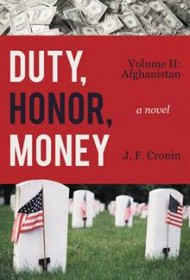 In Duty, Honor, Money, former Marine J.F. Cronin delivers a blistering novel about the U.S. involvement in Afghanistan, depicting a military mission subverted by politics and corruption, both Afghan and American.

Lieutenant Xavier Moran is sent to command a Marine unit stationed on the Pakistan border that has been suffering “unacceptable” casualties. That’s because every time the unit attacks and takes a nearby hill harboring Taliban fighters, the regional governor orders them off.

The author deftly uses an unusually candid intelligence briefing by a disgruntled civilian to explain to Moran what’s really going on. The words “Taliban” and “government” have little to do with the actual divisions between powerful Afghan families maneuvering for profits from the drug trade. The U.S. turns a blind eye because U.S. private companies are making pots of money in “reconstruction projects” while soldiers protect them for peanuts.

Major Ahern, Moran’s brown-nosing superior, doesn’t care how many Marines die so long as he’s still in good with the regional governor. So no one is happy when Moran runs several successful missions that clear the Taliban off the hill and mine it before following orders to stand down. When he has the nerve to disrupt a drug convoy, he winds up at a disciplinary hearing that could result in his dismissal in disgrace.

This being commercial fiction, complete with exciting battle scenes and a tough-as-nails hero, Moran confounds his enemies and escapes a plot designed to shut him up. But he’s still in danger in a cliff-hanging conclusion pointing to a sequel.

The characters are vividly rather than deeply drawn, and Cronin’s prose is more serviceable than beautiful. What gives his novel its powerful impact is its moral passion: disgust at the fact that honorable men are dying for people motivated only by profit and ambition. Every twist in the well-crafted plot underscores Moran’s bitter message: “…We’ll win the battles, but corrupt governments will result in our losing the war…”