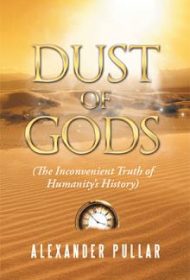 Alexander Pullar, former stock controller and mathematics/computing educator, felt the call to “lift the shroud of mystery and free the truth behind mankind’s success” and embarked on an ambitious opus beginning from day one, continuing through to the most recent moments of history.

In this book, Pullar leaves behind no scientific theory, archeological discovery, or major religious belief system. For example, regarding man’s evolution, his preferred “triggering moment” is a blast from an immense asteroid hit and a thunderbolt that dissipated within a 3,000 meter thick ice sheet. Discussion of this theory sits alongside more commonly held views, including the elusive missing link between man and ape. Creation theory is given its due as well.

Rather than proceeding in a linear fashion, which would have been easier to follow, the author tends to circle back to various topics. For example, his discussion of the Egyptian pharaoh Ahkehneton pops up at more than one juncture, offering the same information each time. Often, readers are left wanting more information, particularly the sources for what he presents as facts (in one instance, Pullar recounts the story of a female pope in the Catholic Church—which begs a citation). Such a formidable work requires footnotes or a bibliography, but these are absent here.

Pullar never touches on his stated goal—explaining the “why” of man’s success—in any meaningful way. Rather, his conclusion is that “if there is a god or gods, does anything else matter?”  And readers may note a bias against the Judeo-Christo-Islamo religious heritage. For example, discussion of monotheism’s beginnings leaves out Abraham, who is considered the founder of those three faiths.

Those who already agree with some of Pullar’s observations, or who are so familiar with his subjects that they don’t need citations may be attracted to this book. Others will do best to look elsewhere.