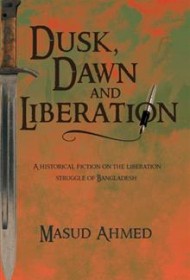 Masud Ahmed’s Dusk, Dawn and Liberation is a historical novel about the dark, volatile events of Pakistan’s civil war from March to December 1971, which led to the establishment of Bangladesh. It is a novel of hope as well, finding beauty in the wake of incredible horror.

The novel weaves together multiple points of view, from the president of Pakistan, Yahya Khan, to other politicians and military personal, to civilians of all backgrounds – ethnic, economic and religious. They reflect the complex motives, actions and results that mushroomed out of the two-winged nation – East and West Pakistan – after its 1947 partition from India. East Pakistan (today’s Bangladesh) had the larger population but also the least support from its central government in West Pakistan (today’s Pakistan). Masud shows how tension between them arose, how it could have been avoided (if politicians had focused on people and not power) and how many people were victims of incredible injustices.

Ahmed’s prose is straightforward yet passionate, although it can also be poetic, philosophical or humorous, exposing the folly of feckless politicians and the heroics of ordinary people. Sometimes his scenes are painfully grim. The most beautiful part is when he focuses on one particular family, especially through the eyes of the son, Asad, a university student who offers a deeply human telling of a complex, harrowing tale.

The story could have been more potent if Ahmed had spent more time with Asad’s point of view. The many viewpoints present the biggest challenge here: Some characters reappear, but many appear only once, perhaps just for a paragraph. While the intent is to show the complexity of events, it often keeps the story from going deeper.

Ahmed’s ambitious novel is a story of healing and humanity triumphing over retribution and despair. It will leave readers feeling empathy for the Bangladeshi people’s suffering on their path toward independence.