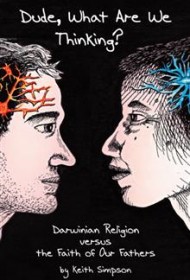 In his book, Dude, What Are We Thinking?: Darwinian Religion Versus the Faith of Our Fathers, Keith Simpson presents a series of arguments in favor of intelligent design. The central premise of his book is that theories concerning natural selection are not supported by facts, but are, rather, products of a belief system that has all the characteristics of religion. Science, Simpson claims, has produced no convincing evidence to prove that life could have originated without divine instigation, or that certain complex systems could have evolved from systems of lesser complexity. Moreover, Simpson reasons that gaps in the developmental record for some species indicate that their differentiation occurred according to a divine plan.

The subtext to Simpson’s intentional design theory is his belief that Christianity should be taught in schools. A society unguided by religion, he indicates, must necessarily dissolve into unethical quagmire. Christian rubrics, consequently, are necessary to keep us humane and lend us dignity.

While Simpson does a good job showing how language pertaining to natural selection invades everyday arenas, such as business and football, the majority of his arguments are skewed by omission and slant. He misunderstands judicial decisions on education and religion and fails to consider the ethical rudders provided by non-theistic approaches such as Buddhism, secular humanism and Kant’s categorical imperative. His representation of the modern trends in evolutionary theory is distorted to the extent that the reader would do well to read his contentions in this area with a resource such as Evolution: The First Four Billion Years, ed. Michael Ruse and Joseph Travis (Cambridge: Harvard University Press, 2009) close at hand for perspective.

Simpson tells us that his book grew out of a dialectic between himself and his friend, Sam, who took the opposing side. This book would be better balanced and Simpson’s advocacy for intentional design would be better served if Sam’s arguments were given a little more weight.