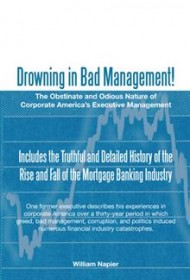 Drowning in Bad Management! is really two books in one: a dissection of what William Napier sees as the shortcomings of America’s corporate management, and a detailed examination of the mortgage-banking industry, specifically its collapse in the late ’90s and again beginning in 2007. That the same industry could suffer consecutive meltdowns in little more than a decade – the second time triggering a global recession – would seem a ringing endorsement of Napier’s contention that executive management in this country is an oxymoron.

To reach his conclusions, Napier draws deeply on 30 years experience in corporate finance across numerous industries, including the mortgage-banking sector. But despite offering a huge amount of detailed, technical information on everything from mortgage-backed securities, hedging and risk, to conforming, subprime and Alt-A lending, the author falls short of the oracle he seems to imagine himself.

A major problem is that he fails to provide enough independent information — such as academic research, expert opinions or supporting statistics — against which to measure his arguments. Furthermore, those arguments are delivered with sledgehammer subtlety and in language that will likely offend some readers.

For example, he categorizes various manager styles as the “Arrogant Know-It-All-Asshole,” the “Do-Nothing Dickhead-Delegator,” and the “Ass-Kisser-Politician.” He describes one company where he worked as a “turd-infested commode.” (At least he has the good grace not to name any of his former employers, though he probably provides enough clues for astute readers to figure out their identities.)

Although Napier makes some valid points and offers occasional positive, if well-worn, advice to shareholders, directors, lawmakers and those in the corporate world, he mostly comes across as crude, crass, and mean-spirited. Talking about causes of the current recession, Napier displays the sort of hubris that ultimately undermines his book when he writes: “I am going to set the record straight here for all the world to see …”