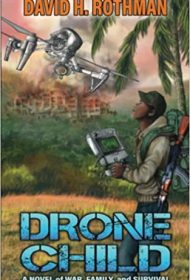 David H. Rothman’s novel, Drone Child, is a disturbing fictional memoir set in the Democratic Republic of Congo in the near future.

In 2050, Lemba Adula recalls himself as a gifted 15-year-old in 2025. At that time, he demonstrates his talent with computers and the Internet, and his twin sister Josiane is a beautiful singer. In the capital city of Kinshasa, the sleazy Monsieur Zumbu hires them to work at his Internet café. Lemba helps customers navigate the Internet and wows them with his skill flying a drone he’s purchased and controls from an iPad.

But soon, Josiane disappears, and Lemba is kidnapped, forced to be a child soldier for the Congolese Purification Army. “Once a Purifier, always a Purifier,” he’s told. “Dead or alive.” Worse, his abductors know where Lemba’s parents live and will kill them if he deserts or fails to help slaughter people.

The group’s gun-worshipping leader, who calls himself Demon Killer, forces the children to murder his enemies with AK-47s and machetes. He takes special interest in Lemba’s drones as a tool for rooting out his enemies. Lemba’s goals, beyond his own survival, are to protect his parents and find Josiane. The story is somewhat self-exculpatory from his point of view. He only kills to save his mother and father. Perhaps he is simply a good person ensnared by an evil man. Yet does that excuse the atrocities the child commits?

The writing is well-edited, smooth and impactful. Mixing invented tribes with well-vetted facts about the Congo, the author creates a tense narrative in which scenes of degradation and violence are effective without being overly graphic. For example, early on a boy is commanded to shoot his parents, “who crumpled to the ground, their polka dot clothes stained with blood.”

This is a compelling story that would be appropriate for mature young adults. An author’s note and thoughtful discussion guide append the book, making it an interesting choice for book clubs.