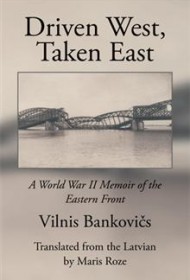 In just a few years before and during WWII, Latvia went from independence to being ruled by Russia and then being occupied by Germany. Later, Russia drove the Nazis out and regained control. Vilnis Bankovics, a young student at the outset of this upheaval, was dragged along during these unsettled times and has written a highly readable memoir of the horrors he endured.

Born in 1923, Bankovics was enrolled at a teachers’ institute when the Russians occupied the Baltics in 1940. After the Germans drove the Russians out, he was conscripted by the Nazis. Eventually, he and fellow Latvians became fighting soldiers—cannon fodder, really—and when the Soviets marched west and overran the German positions, he was captured and imprisoned.

His misery did not end when the war did in May,1945. Instead, he and other prisoners were shuttled from one labor camp to another. Bankovics’ freedom wasn’t truly achieved until April 1950, when the Soviet Union finally released him. And even then, he writes, the war wasn’t over for him and his comrades. “Our feeling is that the war will end for us only with the end of this life.”

Bankovics’ book provides the kind of precise detail that comes only from experience. For example, he explains not only how a camp’s bread cutter did his job, providing each prisoner with a meager daily ration, but also that the bread cutter was near the top of the camp’s pecking order. He also tells of living in a jammed cell with other prisons, one a boy of 16 who contracted typhus and died as Bankovics tried to care for him.

The book’s abundant and useful footnotes provide historical context, explanations and helpful translations of Latvian, Russian and German expressions. All told, Bankovics, with help from translator Maris Roze, has presented an invaluable account of life in the Baltics for historians. Readers with even a casual interest in the war will glean much from this book.