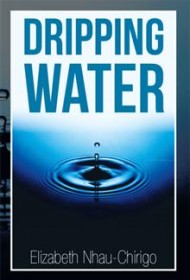 Elizabeth Nyemwerai Nhau was born in Southern Rhodesia in September of 1958. She wrote Dripping Water a half-century later, having returned to the country now known as Zimbabwe.

A lot had changed, not the least of it the author herself, from an indifferent student in a village where houses were polished with cattle dung to a born-again Christian businesswoman eyeing a role in the economic development of her country.

The book chronicles her journey from daughter to wife and mother with two daughters of her own. Later divorced, she supported herself and her children by working variously as a clerk, a chemical trader, a manufacturer of protective clothing, a live-in nanny, a house cleaner and a nurse.

In her book, as in her life, God plays a key role, convincing her at one point to hand over to relatives a house she’d just bought for herself. Her religious retreats are served up in lavish detail, up to and including the food: “a disappointing buffet not nicely presented; it looked like the mushrooms were taken straight from the tins and emptied in the serving dishes just like that.”

By contrast, important milestones – the collapse of her marriage, for one – are given short shrift. The reader can’t help but wish Nhau-Chirigo also had had more to say about her consultation with a witch doctor or her experience as one of the first black women to give birth at a former whites-only maternity hospital.

In addition to such misplaced emphasis, the book suffers greatly from poor writing mechanics. Improper grammar and uneven pacing make this a challenge for all but the most committed reader; the stories might be more successful spoken than written, as the author’s style owes much to oral tradition.

Occasionally, the author transcends her literary limitations, as when she writes: “I was tested like gold ore, which goes into fire so that it could shine.” Such moments, alas, are all too rare.