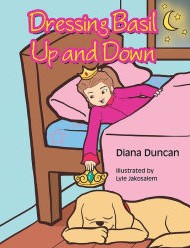 In many ways, this rhyming children’s picture book, Dressing Basil Up and Down, is a cautionary tale about the ridiculous nature of putting animals in costumes. At the same time, it uses this premise to highlight the importance of personal choice and agency.

Basil is a Labrador whose owner—a little girl named Matilda—has a penchant for dressing him in extravagant costumes. Basil finds the practice emasculating, and the clothes make him both embarrassed and aggressive. One day, Matilda’s mother finds a way to convince Matilda how silly her game is: While at the zoo, Matilda’s mother talks about how the elephants, lions, and other animals would look if they wore dresses and bows. “When they look at the lions, all tawny and tough/Mum says, ‘How silly they’d look dressed in tutus and stuff.’” Seeing how undignified this would be, Matilda agrees to put an end to her hobby.

The story’s rhythm is infectious and the language-play fun. The pages are brightly illustrated and contain loveable characters. Children will chuckle at Basil’s expression as he sulks under the bed “With a Barbie tiara on top of his head.”

Still, some might be uncomfortable with the underlying messages. Imaginative play comes under fire here. Also, Matilda is criticized not just for dressing up her dog, but for dressing up a male dog in form-fitting, often traditionally feminine clothing. “In sparkles, he feels like a queen, not a king,” reads one line. In another moment, Basil chases a smaller dog “to prove he’s a man and to give him some face.” This gendered approach can make the story more about masculine and feminine stereotypes than agency, independence, and personal choice.

Still, Dressing Basil Up and Down is infused with a playful spirit. While some parents won’t appreciate the way it implicitly and explicitly utilizes gender stereotypes, the overall takeaway is meaningful: that one shouldn’t clothe animals because they “are beautiful just as they are.”