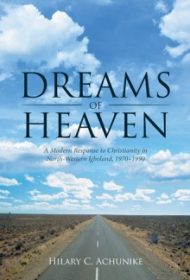 Many books have been published that examine the origins of religion. Few, however, explore how belief embeds itself into—and is sometimes rejected by—a culture. In Dreams of Heaven, scholar and Catholic priest Hilary C. Achunike presents a sociological examination of Christianity, a relative newcomer to Nigeria, and its often-tenuous relationship with the Igbo people of that region.

Drawn from the author’s master’s 1994 dissertation, Dreams of Heaven seeks to highlight the history of the people of southeastern Nigeria and their struggles with Christianity (the faith only began to take root in the 19th century). As Achunike points out, what is often practiced in this region is a syncretic form of Christianity, one that incorporates Catholicism and native pagan rituals. This hodge-podge of belief systems influences marriage ceremonies, oath taking, funeral rites and even class systems.

While sympathetic to the traditions locals hold dear, the author argues that watered-down Christianity isn’t Christianity at all and often leads to materialism, superstition, and cultural strife. The Igbo people, the author posits, can find truth and purpose by embracing a more uniform Christianity and “create a spirit-filled community where Christ is worshipped [and] understood” more fully.

Achunike presents an informative profile of the region. His best work involves his examination of folk traditions and in describing changes in spiritual tastes (e.g., the rise of Pentecostalism putting stress on Catholic churches in the area). However, while the author’s intelligence and logic is apparent throughout his narrative, his prose, like many academic works, can be dry. It’s also hampered by occasional awkward phrasing, misplaced commas, and run on sentences (e.g., “They are often not tough-minded enough to have a firm belief of what lessons Christianity teaches, these fall within the second segment of the diagram”). Such moments prove distracting.

These shortcomings aside, the author’s message is clear: Catholic leaders need to do a better job evangelizing to their flock or face losing them to the gravitational pull of native culture.