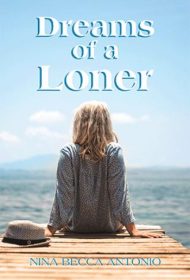 In Dreams of a Loner, author Nina Becca Antonio recounts stories about her father’s abuse and dysfunctional family, delivering a complex and frequently touching memoir.

Antonio writes about a life spent in several worlds: moving with various family members between Greece and Canada, opening and closing restaurants, and juggling secrets that begin to take a toll on her health. Her father molested her and one of her sisters throughout their childhood; he was also abusive to their mother. She tried to protect her younger siblings while living in terror of her father roughly until his death. She is frank about how she was an imperfect mother to her own kids.

The first two-thirds of the book clip along steadily. It’s difficult to keep up with where family members are at any given time, but their fights, drug abuse and gambling addictions make for an engrossing read. Antonio calls herself “Lisa” in the book; it’s unclear if she’s changed other names in the book as well. If so, she might have avoided using multiple Robs and Mays and half a dozen Toms, as telling them apart can be confounding.

The book also is sloppy in parts. The author recalls, for example, seeing The Dakota apartment building where “Michael” (it should be John) Lennon was murdered.

Reminiscences of travel and family in better times round out the book, but they become tedious, focusing on the quality of food and drink in various locales. Their inclusion is understandable, given the family’s history in the hospitality industry, but they quickly lose reader interest.

The title seems ironic given how often Antonio is nearly drowning in family members, but Dreams of a Loner makes the point that child abuse forces people to become overly self-reliant at a young age, a habit that dies hard in adulthood.