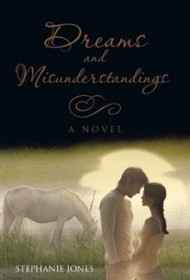 Stephanie Jones’ new romance novel, Dreams and Misunderstandings, delivers a story sure to please die-hard fans of the genre.

Jessie, the only child of a wealthy Wyoming rancher, was raised to marry Scott, heir to a local business empire. But ever since she was young, she carried a secret crush on her best friend’s brother Rick, a half-Navajo half-English rancher. The day before Jessie heads east to college, she and Rick confess their love and make plans to endure their upcoming separation. Just how much endurance this would take, they could not have foreseen.

An unexpected inheritance takes Rick to England, then Montana. Jessie’s mother, desperate that her daughter marry Scott, manipulates and lies, leaving Jessie and Rick separated and confused. Tension builds as Jessie is left vulnerable without Rick’s protection and is physically threatened by an increasingly frustrated and unstable Scott. Fate brings Rick and Jessie together again – but can they survive Scott’s vengeance?

This well-written romance novel fulfills all the requirements of the genre. It opens with a promise; the characters are clearly defined, believable and relatable; the nemesis is motivated and relentless; the plot is logical with increasing tension and realistic setbacks. The sexual intimacy is mild and fits the characters and story. Finally, the use of description puts the reader into the setting: “The dining table gleamed with silver and crystal reflecting the light of the candles and the bowls of roses.”

Readers who enjoy the Harlequin Romance (Mills & Boon) series will like this book, with one caveat: at one point, there appears to be an improper chronological placement of the back-story (perhaps this is a misprint?). This brings a disconnect to the story, but otherwise, the book is skillfully written indeed.

This is an engaging romance novel with sympathetic characters, a blend of tension and romance and a satisfying ending. Add it to your romance reading book club list.