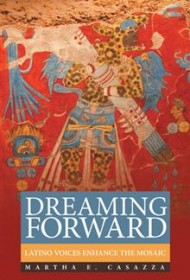 Martha E. Casazza, chair of the board of the Instituto Justice and Leadership Academy in Chicago, spearheaded a project to collect personal reminiscences over four years in two Mexican American communities. In this collection, the interviews she and her colleagues conducted tell of loyalty to the culture and community of the old country, against a backdrop of prejudice and opportunity in the new.

​Using questions about education as a springboard for more general recollections, interviewers found that most Latino participants want to maintain their ethnic traditions while moving ahead in America. The interviews are recounted in the storytellers’ original words (in English).  Each is told independently of the others and includes a short preface and wrap-up from the author.

The subjects speak of struggle, determination and hope. In one interview, ”Carmen and Angela” recall the start-up of a new high school geared to Latino youth. Problems included bias in the local, non-Latino community and a high dropout rate—“you start with six hundred and you end up with two hundred or less”—attributed to inadequate support services offered in Spanish, which they later initiated. “Jose” recounts moving from state to state, often being put back a grade, sometimes allowed, sometimes forbidden, to speak Spanish. He worries about his children growing up among gangs in his Latino neighborhood.

Casazza and the other interviewers gave participants full latitude to express their feelings. By offering a variety of story contributors—students, educators, church workers, young and older, native born and newcomers, community activists—Casazza shows it’s impossible to typify the immigrant experience. The common element, she notes, is that interviewees “see the past as a beginning” and continue to “dream forward.” The result is a human-scale, readily comprehensible picture of Latino lives in flux.

Immigration and assimilation are major issues in the U.S. and the world at this time. Dreaming Forward presents new ways to examine the broad scope of Mexican American immigrant life, providing paradigms to ponder.