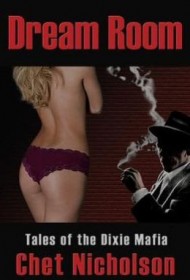 This first of three books left behind by the late Mississippi Gulf Coast lawyer Chet Nicholson provides a treasure trove for armchair detectives interested in the mythos of the “Dixie Mafia.”

Unlike the notoriety attained by the likes of John Dillinger or Pretty Boy Floyd, this motley crew of burglars, thieves and grifters mostly stayed under the radar until the 1987 murder of Judge Vincent Sherry, the book’s culminating event. Nicholson apparently had unprecedented access to the late Mike Gillich Jr., the Dixie Mafia kingpin, and his wife Frances, and here he dramatizes the events of their lives, punctuated by what appear to be real interview transcripts detailing their squalid crimes.

Gillich came under the tutelage of Henry Salisbury, a Southern hit man who married young Frances before tricking her out in brothels along the Gulf Coast. The book contrasts Gillich’s relatively sedate approach to crime— employing prostitution and drugs in seedy strip clubs—to that of another Dixie Mafia member, Kirksey Nix, Jr., who quickly graduated from stickup jobs to murder. Gillich, long in love with Frances, essentially inherited her after Salisbury’s death and rose to power within this criminal confederacy.

The book strongly resembles the epic crime novels of James Ellroy with its mix of historical accuracy and profane and violent acts. It culminates in a conflagration between criminals. Nicholson doesn’t exactly glorify the Dixie Mafia, but it’s obvious where the novel’s sympathies lie when it portrays Sherry as just another corrupt politician who got what he deserved.

While it’s difficult to gauge the story’s authenticity, as a work of drama the book is unflinching in its portrayal of criminal and sexual violence. Nicholson has an excellent sense of character and pacing, and the book’s violent beats are in sync with its portrayal of the ignorant but dangerous thugs at the heart of the criminal enterprise. Fans of true crime or movies like Goodfellas will find this sordid epic hard to put down.