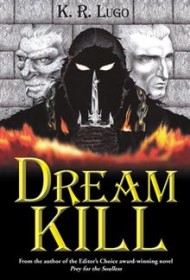 While the introductory scenes are set in everyday police interrogation rooms and middle-class suburban homes, Lugo wastes no time in rolling out the more surreal and nightmarish elements of his story. Amid the relatable central characters and familiar settings, the author quickly introduces an antagonist with no roots in reality: Dream Kill hinges on a baddie straight out of the most twisted kind of fairy tale.

The action kicks off with immediate tragedy. Callen Sloane, a used car salesman trying his best to be the model family man, faces a profound crisis after the murder of his wife and young twins on Halloween. Lugo reveals that the culprit is no ordinary criminal; instead, the tragedy comes at the hands of an ancient evil, a monster called Vorrenick who is thousands of years old and can travel between worlds.

As he sets out on an epic battle with Vorrenick, Sloane struggles with nightmares, grief and insanity to face dark secrets from his own past. He finds an unlikely group of cops, criminals and other allies in his conflict with Vorrenick, an antagonist threatening to take over his own mind.

The balance between realism and fantasy recalls themes and plot structures from Stephen King and Peter Straub. Lugo revels in combining the profane language and gruesome imagery of true crime with the fantastical and supernatural elements of the horror genre. For the most part, the fusion works, with the exception of a few awkward transitions between the crass and the otherworldly. Apart from its general pulp feel, Lugo creates a compelling tale that never seems formulaic or predictable.

The gory and stark feel of the book may be a bit much for casual readers, but horror and crime fans will find a promising work packed with genuinely creepy moments in these pages.