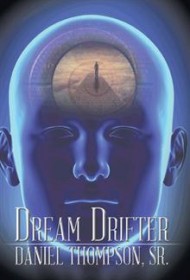 Danny, the protagonist of Daniel Thompson’s novel, Dream Drifter, is plagued by nightmares and waking visions.  In these visions, he is pursued by monsters and witches, the type that childhood stories thrive upon.  “The monster,” he says, when describing one encounter, “had an evil, grimacing grin, and its face was also hairy, similar to that of a gorilla.”

While Danny is still young, these monsters typically come from the basement or appear in Danny’s bedroom late at night.  Later, as Danny grows, he sees them farther afield, and his dreams become more complicated, encompassing images of war and invasions from outer space.  The young Danny has a hard time, until he learns he can invoke Christ to scare away the monsters.  The older, adult Danny, in a continuation of the Christian motif, envisions Christ’s Second Coming as a resolution to his trauma.

At first glance, the reader would expect Dream Drifter to be a middle grade novel because of the simple writing style and initial subject matter. The book’s narrative line, however, includes the religious twist, as well as the protagonist’s marriage and development of a family; it also describes a portion of his work-a-day world. All of these plot elements are more appropriate for an adult audience. The problem with pitching this novel to adult readers, however, is that the monsters are not developed enough to hold a more sophisticated audience’s attention.  Such readers would need to encounter monsters with more complexity, ones that have their own thorny problems and aching vulnerabilities.

The novel also suffers from a lack of rising and falling action, and, although the main character has an engaging voice, he develops little during the course of the narrative.

Compounded, these issues greatly undermine the story. Dream Drifter would need a considerable rewrite, with closer attention to a defined target audience, before it could garner a readership.