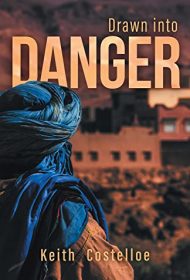 Keith Costelloe’s new novel follows an Englishman in Algeria as he embraces a new way of life and finds himself involved in espionage.

The novel begins in 2021, when David Graham receives a phone call from an old acquaintance, Farid, whom he met during a youthful stay in Algeria. Farid is coming to town and wants to talk.

The novel then goes back to 1978, when 24-year-old David, finding himself at a loose end, sets off on a whim to teach English in Algeria. After a humorously rocky start, David embraces the local culture and falls in with a group of liberated friends and lovers, including Moussa, an Algerian medical student; and fellow expat teachers Liz and Sue.

When another expat teacher, Beau, acts caddishly toward Liz, she convinces David and Moussa to help her confront him. In a confusing turn of events, Moussa realizes that Beau is under government surveillance. Because David has associated with him, the government intimidates David into performing initially low-level espionage work. Moussa convinces David that everything will be fine, but he and his friends soon find their lives at risk.

Costelloe excels at bringing the Algerian setting to life. For instance, David’s first encounter with a traditional steam bath makes palpable both the apprehension and the joy of discovering something new far from home. The characters, too, are engaging. Bohemian but believable, they are easy for the reader to like.

The novel’s weakness, however, is its plot. Although the relationships among the characters are intriguing, the espionage element feels forced and convoluted. David, Liz and Sue, otherwise such vibrant characters, become unconvincingly passive in the face of the government’s demands. The present-day frame story passes too briefly to achieve any emotional resonance.

Drawn into Danger’s strengths are its sense of place and sympathetic characters. It would make a wonderful coming-of-age story without the espionage element, but ultimately falters as a thriller.