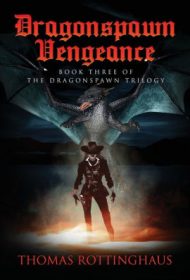 As in the first two books of his Dragonspawn trilogy, Thomas Rottinghaus fuses elements of standard fantasy with a pulp Western feel and the careful character study of a psychological thriller in this concluding installment—and even manages to throw contemporary references into the mix.

Rottinghaus begins by tracking the inner struggle of protagonist Jacob Grimwullf, a kind of antihero who is a Dragonspawn, meaning he has the power of dragons in his blood. Dragon Slagg, also known as the Sky Rider, is intent on convincing Jacob to help unleash a dark power on the world, and Jacob is struggling to resist that influence.

Jacob is also a magii’ri —a member of a warrior race chosen by the gods to uphold a mystical code— as is his mentor, Luke. This order bears a striking resemblance to the old Western gunslingers (and Stephen King’s series of the same name). Luke is on a quest to find the Book of Runes to stop an evil dark lord who is causing chaos in Norland, and, as it turns out, another alternate world.

The paths of both magii’ri ultimately intersect, as Luke and Jacob’s quest to restore balance to their realm ultimately lead them through a magical portal to an enjoyably surprising setting and varied mix of action that includes jail breaks and outlaw gangs on horseback, as well as evil magicians and a corrupt, contemporary American president.

Readers new to the trilogy are likely to be confused by its established, dense mythology. Indeed, even veterans of the series may be overwhelmed by the endless narrative threads the author seeks to weave together. Sometimes that task feels too large for the book’s 274 pages.

Generally, though, Rottinghaus makes it work. The novel is full of genuinely engaging, exciting action sequences and intriguing character development. These aspects make up for the occasionally overambitious goals of a story that flips between worlds and carries a heavy mythos on its shoulders.