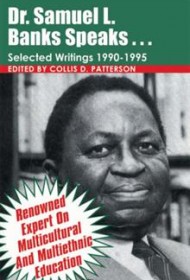 As director of social studies for the Baltimore public school system, Samuel L. Banks influenced countless students, teachers and administrators. He was especially avid about incorporating a multicultural curriculum into the day-to-day classroom lessons.

Among those Banks influenced was the editor of this slim volume, Collis D. Patterson. Banks mentored Patterson after they met in 1973, and continued to advise him as a classroom teacher, especially regarding effective ways to reach African-American children.

Before Banks’ death in 1995, he sent a voluminous amount of his writings to Patterson, apparently without explanation about their disposition. Years later, Patterson sorted through the writings and selected 26 – ranging from full-fledged essays to letters meant to be published in the comment sections of newspapers – for inclusion in this book. Some of the pieces are directly related to classroom teaching, though many are not. Most involve racial identity and race relations in one way or another.

Some pieces are beautifully written; others would have benefitted from a skilled editor at the time. (Banks is especially prone to using three adjectives when one would suffice.)

The book includes an epilogue by educator Jacqueline L. Frierson and a tribute poem by Mary L. Harmon of the Baltimore public school system.

It would be nice to think that a person as apparently exemplary as the author would reach a wide audience after his death. Unfortunately, given the uneven nature of the pieces in this book, it’s difficult to imagine this title holding interest for anybody but surviving family and friends.