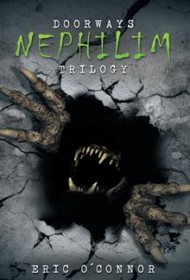 The first in the Nephilim trilogy, Doorways is a fast-paced, action-packed fusion of horror, dark fantasy, and biblical myth that ultimately falls short due to writing flaws.

The premise, while not exactly original, is structurally sound, featuring three solid plot threads: A rich entrepreneur has one of his employees travel to Iraq to locate and acquire a strange artifact, with instructions to bring it back to New Mexico as soon as possible; an Albuquerque bank executive who has lost everything meaningful in his life (his wife and daughter were killed by a drunk driver) finds what could be salvation in a mysterious single mother; a Japanese software employee with a hatred for all things American is transferred to a new office in New Mexico.

Despite the promising plot outline, however, the storyline falters due to mechanical errors. The narrative is filled with point-of-view inconsistencies, as one sentence is often written in first-person, the next in third-person. The almost-constant point of view shifts quickly become frustrating (i.e.: “This day most definitely had a rocky start and it is barely two hours old. But now, the day is working in my favor. Even the stinging of his left hand, from gripping the car keys…no longer bothers him”).

The text is also inundated with tense errors, with some sentences written in past tense, others in present tense. Many sentences even have both: “Nothing seemed to be moving and the area is eerily silent.”

Overall, the writing has a rushed and unfinished feel to it. Sentences like this one, for example, should have been edited long before going to print: “Ray quickly contemplated just driving away quickly.”

Such writing errors are unfortunate because the story has many excellent aspects—particularly its character development. The cast of characters is well described, interesting, and memorable. But the technical missteps cannot be ignored. Coupled with an unsatisfying conclusion (essentially a respite until Book Two), this novel presents a challenging reading experience.