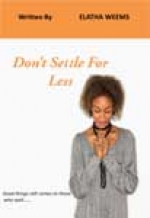 Women by nature are queens and deserve all the respect and deference that goes with the title. That’s why, writes author Elatha Weems, they should heed Weems’ advice and, when it comes to picking men, not “settle for less.”

Sharing takeaways from four toxic relationships, Weems says that her painfully acquired wisdom (such as not caring for someone else more than herself) strengthened her resolve to ensure that other women didn’t make the same mistakes. Weems bolsters her arguments by sharing advice from her grandmother (who advocates that women dress and act discretely) as well as quotes from Scripture that she amply sprinkles among her book’s pages.

Weems’ own experiences give her words some credibility. And many of her observations have the ring of good common sense (i.e., “Don’t allow anyone to control you.”) But there are some big chinks in her armor of beliefs. She complains that there are still plenty of double standards for male and female behavior, yet then proceeds to dish out her own. No doubt many women (and men) will cringe when they read that men, by nature, cannot be good stay-at-home dads simply because they can’t multi-task as well as women.

This type of rogue assumption degrades Weems’ message. She bemoans the fact that men don’t treat women with the respect that they did in the past. But it’s a good bet that many women will gladly open doors for themselves and accept a degree of profane language in their presence rather than hearken back to a time when the world accepted unequal pay and the inability to vote for women.

Readers who can suspend judgment on the authors’ checkered beliefs will find some useful nuggets. Most others will be too turned off to listen.