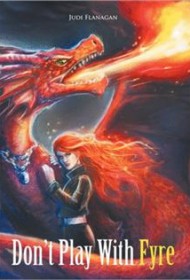 On her 20th birthday, Molly Frye makes the decision to take the Elixir that will make her an “immortal.” Her friend (and soon-to-be-lover) Eric guides her through the process, explaining that she would now develop magical skills. The transformation takes place in the home of Arnos, the man who took her in when she was orphaned two years earlier.

Then Arnos makes a shocking declaration: Molly is to lead a quest to recover a sacred artifact known as the Krystal that was stolen by an old enemy of Arnos’. Her team is comprised of other immortals with special skills of their own, such as shape-shifting and mind-reading, but only Molly has the ability to transform into a fire-breathing dragon. They set out on the dangerous journey through mysterious forests and ever-shifting loyalties and revelations.

There is a strong imagination at work here, and Molly’s first-person voice can be appealing, but unfortunately, there is so little development of characters, tension, conflicts, or the alternate world in which the story is set that the novel lacks narrative drive and is often contradictory or baffling. Arnos is quickly identified as a villain, for example, but because Molly’s life with him is never developed, there isn’t the sense of betrayal the author intends. When a character declares the intention to end Arnos’ tyranny, the declaration is puzzling because that tyranny in nowhere in evidence.

For a fantasy to be successful, the world created must be believable and consistent. In this case, Molly works for an insurance company, but there is nothing to give readers any understanding of where the magical, semi-medieval locations are in relation to her job, or how a group that includes a dragon and goes on quests fits into the non-fantastical world. Despite original elements, without a fully realized context, readers aren’t likely to stay engaged with Flanagan’s story.