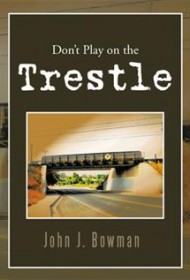 John Bowman spent 50 years pecking away at a memoir, one sketch at a time, and in 2000, he promised to self-publish. At 86, he fulfilled that promise. At its best, Don’t Play on the Trestle paints clean, candid scenes of the author’s tragic childhood in the border town of San Ysidro, California.

When he was 4 years old, Bowman’s mother was gunned down by his stepfather, who also killed himself. Jack and his sister were taken in by ill-equipped teenaged aunts and elderly grandparents. The author chips away at the story with short, sharply focused vignettes, interspersing memories of his loveless, chaotic life with fond tales of friends who congregated beneath a railroad trestle.

Bowman hits his stride with chapters about stealing comic books, playing tree tag and his grandfather’s death. His spare, unsentimental words let the upsetting memories speak for themselves, as they do when he writes about revisiting the murder scene at age 82: “The aging bungalow conjured one overpowering thought – Sweet Jesus, I sorely miss my tender, loving mother.”

But once Bowman leaves behind the emotional heat of his early years, he loses his edge. The introspection dissolves, taking readers on a race through the next six decades of finding a mentor, graduating college, getting married, becoming a teacher, and raising four children.

Near the end, Bowman seems to have forgotten the point he set out to make. He tells stories out of order, referring back to things he has not yet written, and retells other stories.

In the introduction, Richard Louv describes Bowman as a man who spent his time fathering a family when he might have been writing the great American novel. Without negating that accomplishment, the reader is left wishing Bowman had gotten more of his story written while the flames were hot.