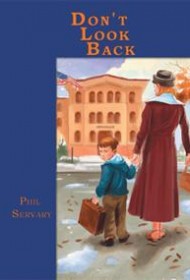 Don’t Look Back is a heartbreaking children’s book about an innocent boy’s painful journey through the social services system of the mid-’50s. The book is inspired by the author’s remarkable story of survival and his search for a family to love unconditionally.

Curtis is a shy boy traumatized when his mother is forced to give up her children for adoption when she finds herself unable to feed and care for her large family. He is the oldest of four siblings placed in different orphanages throughout Maryland. Small for his age and understandably fearful, Curtis is unable to trust other children or the adults around him. He can barely speak. Hungry for food and a sense of safety, he is moved many times. He is fed well in the orphanages, but his profound loneliness is undiminished.

Years pass. Families hoping to adopt reject him in favor of younger, more talkative children. When a kind cafeteria worker asks Curtis what he wants for Christmas, he whispers that all he wants is a mom and a dad. Finally, six months later, a couple decides Curtis is the son they have been looking for and adopt him. When his new mom opens her arms and hugs him, he knows at once he has found the love he has been seeking.

Phil Servary’s writing style is simple, unadorned and not finely crafted. That said, Don’t Look Back remains a moving look at survival against all odds. The book dares to do what the title advises against: it looks back at the scene of an emotional crime and finds meaning. Joel Pellerin’s illustrations perfectly capture mid-century America and a child’s simple fear. Parents be forewarned: this is difficult material for children – or anyone with an empathetic heart. But it is ultimately a simple story about the redemptive power of love.