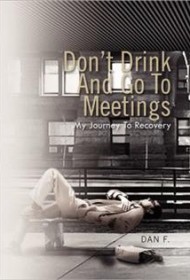 Dan also seemed to have a gene for tragedy. Before he was eight, he had witnessed five unrelated deaths in his New Rochelle, New York, neighborhood, including a grisly car accident. Shortly thereafter, his 32-year-old father, an alcoholic, died of a heart attack. Left with his mother and three siblings – and no one paying much attention – the eight-year-old Dan began to hang out with the older guys and sip from their beers.

“…I didn’t start drinking alcoholically until I was thirteen or fourteen,” he writes, “but this introductory period helped me make the transition into full-blown alcoholism very easily…” By high school, he was getting in fights and blacking out from alcohol. His brothers were in and out of rehab. His sister died of an overdose at 22.

Dan’s account of his descent into alcoholism and all that it entails — the drunk-driving arrests, lost jobs, homelessness, ruined relationships and his long, hard road to recovery — are told in the first 75 pages as “My Story.” He’s an affable and engaging guide on his journey, making this the most successful part of the book.

The remaining two-thirds involve lessons the author learned at Alcoholics Anonymous meetings and the 12 steps that are its guiding principles. Although that may be helpful to some readers, the latter sections rehash much of the same personal history and anecdotes covered in part one, becoming a repetitive read.

Still, the author’s honesty and clarity shine through, making this a respectable, if somewhat uneven, addition to the literature of addiction and recovery.