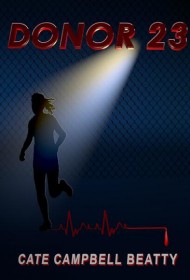 Like some recently released young adult dystopian thrillers—namely Veronica Roth’s Divergent trilogy and The Hunger Games saga by Suzanne Collins—Beatty’s debut novel should find a fervent audience of adult readers as well. In fact, to classify this as “young adult” seems like a great disservice: it’s a post-apocalyptic thriller that, because of its courageous 17-year old heroine, will also appeal to teen readers.

Set in a world where humankind has been decimated by an asteroid strike, the story takes place generations after The Impact and revolves around a girl named Joan Lion, who lives in a nation known as the Alliance. A totalitarian society ruled by the all-powerful Governor, the nation’s social order is rigidly defined: There are citizens and there are donors. Donors live in the ghetto and are legally obligated (by the Living Tissue Tax and Beneficiary System) to give up any organ or body part to his or her personal benefactor. Jane, an incredibly gifted athlete, is one of the donors for the Governor’s daughter—and after giving up miscellaneous ligaments and connective tissue throughout the years, she finds out that she will soon be essentially murdered for her heart and lungs.

Forced to run for her life or die, she heroically makes it outside of the Alliance walls and into the wilderness. Joan has always believed that nothing exists outside the walls except barbarians and lawless nomads but there have been whispers of a civilization of free people far to the west—if only she can evade the Tax Enforcement Officers long enough to find sanctuary.

Paced at breakneck speed and utterly readable, the storyline is a highly palatable fusion of suspense thriller and post-apocalyptic travelogue—with a little romance thrown in for good measure. But the novel’s real power comes in its thematic exploration of how inane social biases can mean the difference between prosperity and poverty, happiness and misery, and in some cases life and death.

Entertaining and enlightening, this novel—and hopefully series—is every bit as good as the aforementioned blockbusters.